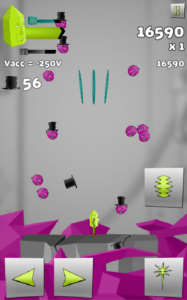 Argon Rain is my first published game and recently I seriously thinking about making re-edition for AR. The game is based on an old good Space Invaders but it is move into semiconductor technology world. The action takes place in the Reactive Ion Etcher (RIE) during the process of etching by heavy Argon Ions. The main character, Mr. Gansy is his name, he is the Gallium Nitride (GaN) nano-pillar LED.

There is also a bit of tactic in this game as well. Simply because some resources can be recovered whereas others not. But do not forget to collect the indium (In), which allows you to fight against Argon Ions.

Play the game for free on your android devices: